“I paint because I find joy in color, mystery in the process, and for the love of discovering new expressions and interpretations" 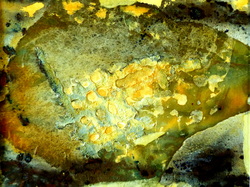 JoAnne Hinrichs Hungate, 79, is an established artist working in water media, collage, assemblage, and miniature art, including portrait and pet commissions, and photography, for 70 years.

Her work has won awards and has been shown in juried exhibits all over the United States, from the East Coast to the West Coast in one person shows, area art association competitions, and galleries.  Her paintings are in Boston area non-profit offices and health centers, in collections in many other parts of the United States, Canada, Japan, Korea, Australia, New Zealand, etc.  Three pieces were on display under the ARTS in the Embassies U. S. Department of State program, one of which was used in the 2012 State Department desk diary.

JoAnne’s miniature paintings have been chosen for more than 30 international miniature exhibitions and have won awards and have been featured in several galleries.   She is a designated “Copley” Artist having had over 10 paintings juried into the Copley Society of Boston at its famous historic Newbury Street gallery.  After recently moving to the Southwest, her watercolors, acrylic and mixed media/collage paintings have been in galleries and exhibits in Tucson, Tubac, Green Valley, Oro Valley, and Marana, Arizona.  She received the Ursus Abstract Award at the National Aqueous Show held in Tubac, 2011, and was also in Works on Paper, a national juried show held in Tubac late 2011, and the 2012 Aqueous Show, a one person show at the Tucson International Airport in 2013, February through April, two person exhibit at the Murphey Gallery, Tucson, May-June, 2013, exhibit of paintings at Dragonfly Gallery, Tucson, 2014.

As an early user of watercolor paints in monotype, she was a founding member of Partners in Printmaking in Lincoln, MA.  Many of techniques she developed and teaches are now being used by others.  She teaches a limited number of workshops on monotypes.  JoAnne is a juried artist member of National League of American Pen Women (past president of local MA chapter), The Copley Society of Boston (life member and past board member), The Miniature Painters, Sculptors, and Gravers Society of Washington, DC, Contemporary Artists of Southern Arizona (CASA board member, signature member), Tubac Center for the Arts, PaperWorks, and Southern Arizona Watercolor Guild (signature member).

“My artwork depicts my impressions and interpretations of moods and rhythms, offering my vision of a unique fusion of movement, color, and innovation as my art portrays a shifting scene that engages the viewer.”

Find my artworks on Saatchi Online
Back to top